I didn’t get a lot of info on this.  Can someone enlighten me?  I suspect it’s a “knock off” kitted out to look like an early BMW?  Or am I way off here.  Not my area of expertise… obviously.  This was sent to me as a for sale post way back in November so I would think it’s sold by now.  But all the same… Great looking scoot though! 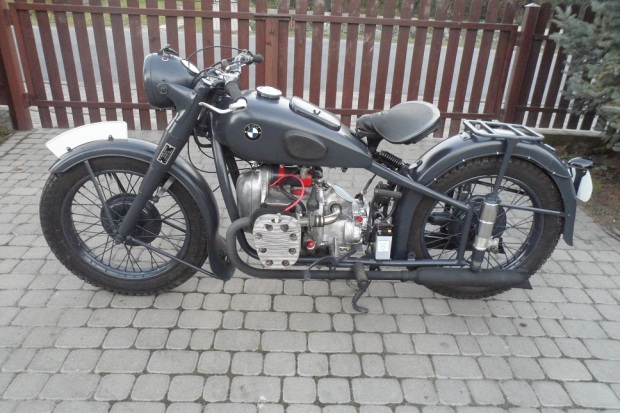 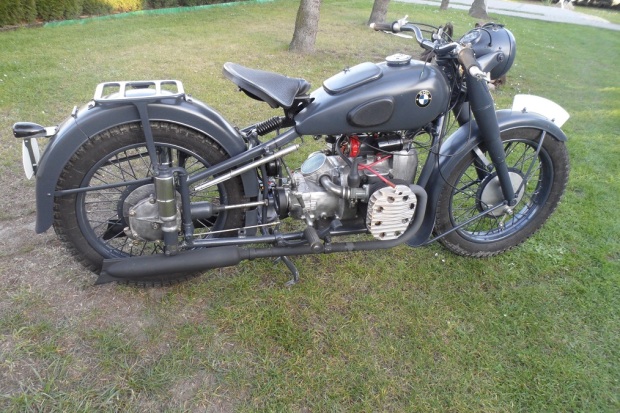 Thanks to Matt Krsul. Sorry about the foul-ups. I have a “legendary” (in a bad way) spam filter. Please do keep em coming!

Steve,
I had sent this before as well as a couple others and never did see anything. I am resending this one.

A complete ground up restoration for a customer on this 1967 CL77 Scrambler. Customer did not want a “Perfect” one, but one he would be comfortable riding as well as showing.
Interesting sidenote: My father started the Honda Dealership in Butte in 1961. I remember Jim buying Honda’s at our family store back then. This was not one of them but a neat story non the less.
I have more bikes to send photos of as time permits.

Folks who know me know how much I love old 2-strokes and this is one trick little scoot!

Thanks to George Wenman! 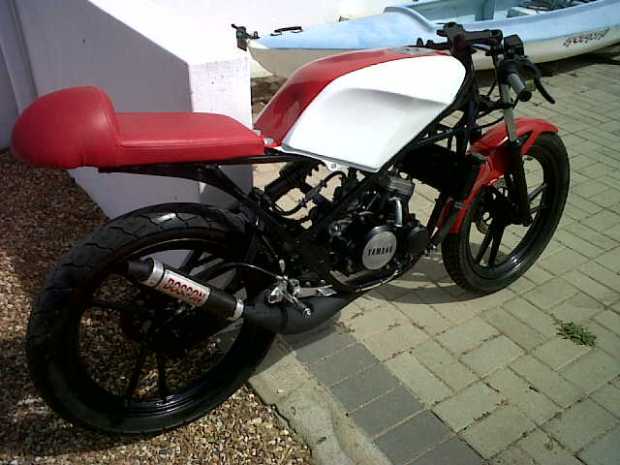 Mariano Labat sends in some before and after pics of this excellent NSU rebuild. Very impressive!

Hello, my name is Mariano and I live in Argentina.
(I bought) this bike two years ago with the idea of restoring it. After much work the finish. I wanted to share this with your blog.

Thank you Mariano! You did Fantastic Job! 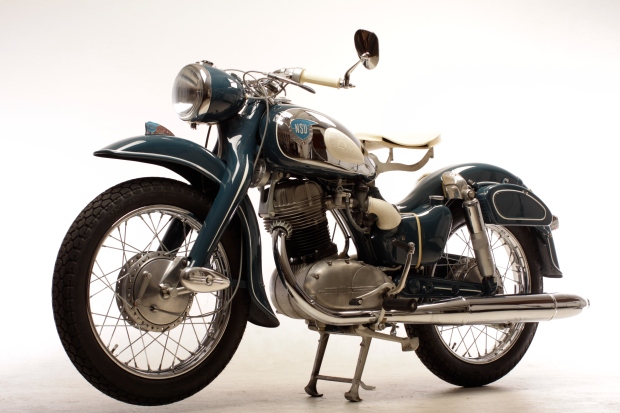 Some nice build pics as well. I really like that engine stand!

Now THAT”S a save! Hard to believe it’s the same bike. For more shots of the bike in process take a few minutes and check out his gallery pages. There’s a lot of other excellent Ducati shots there as well. Nicely done Craig!

I saw a link to your site on Ductalk which led to some before and after photos of a Ducati single. Here’s my version of a similar bike… it’s a 1966 Ducati 160 Monza Jr that was restyled using older Ducati bodywork.

After spending too many years working on it on and off I finally got it back on the road just in time for the vintage bike festival at Barber Motorsports last year. With about 15 miles on the bike we threw it on the trailer and drove 13 hours to get there. Took it off the trailer and it ran great all weekend.

There’s a real satisfaction that’s hard to explain to have literally held your classic motorcycle’s crankshaft in your hands and brought the bike all the way back. That’s one hell of a save for one hell of a nice classic. Thanks to Brian Conner for the album links. Here’s a link to the complete smugmug album thread. Great Stuff. 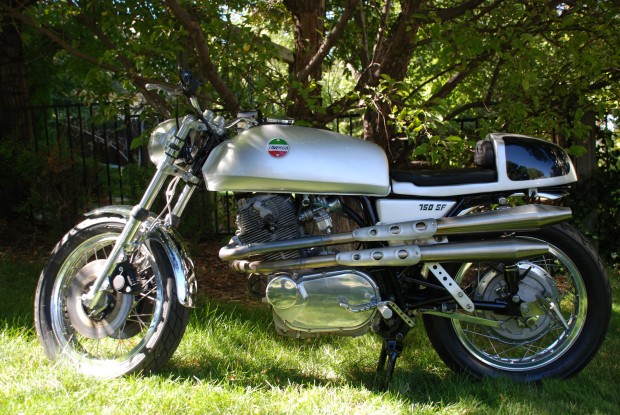 And a few from the trip there. See the link above for the whole album. 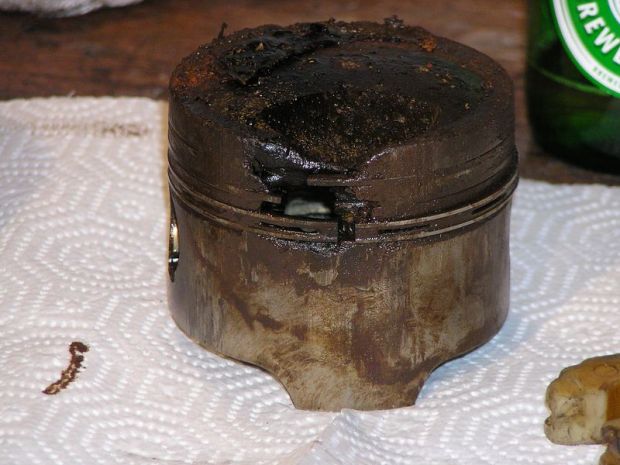 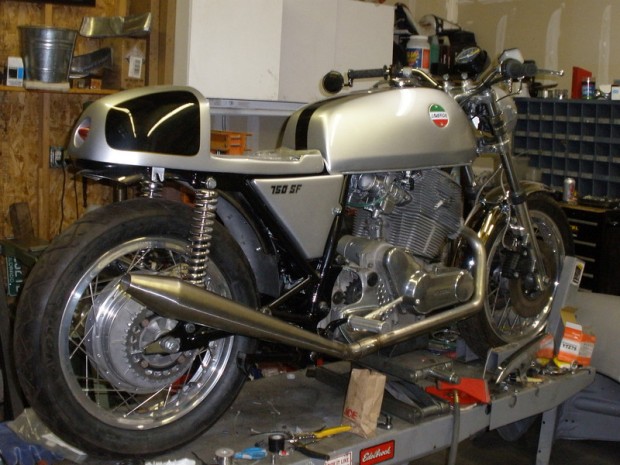 When I look at builds like this it humbles me. I realize that comparatively, I’m lazy slob who spends too much time thinking and not enough doing. Off to the shop with me to make amends to the gods of the mods..

And for crying out loud head over to the ADV rider build thread and check out the full history on this bike.

As you read in the title, the project was to fix an old beaten up 1965 Royal Enfield to a Scrambler. I live in New Delhi, India and this Enfield was originally imported from UK. All pics from start till today are updated on my advrider thread. Here’s the link :: http://advrider.com/forums/showthread.php?t=633461

Also a little history on the project, this was my second project (you also featured my other project on your website. It was a Royal Enfield Cafe Racer). This has been named after my wife too (Richa + Enfield = Richenfield). Also, no fancy machines were involved in making of this bike as you will see in the pics, all custom work was done by hand and all body work was done the same way. 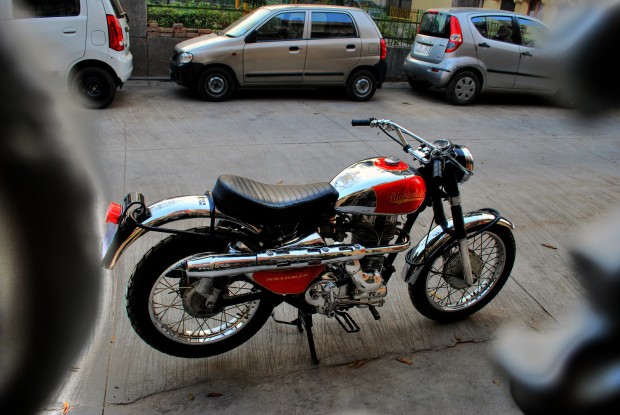 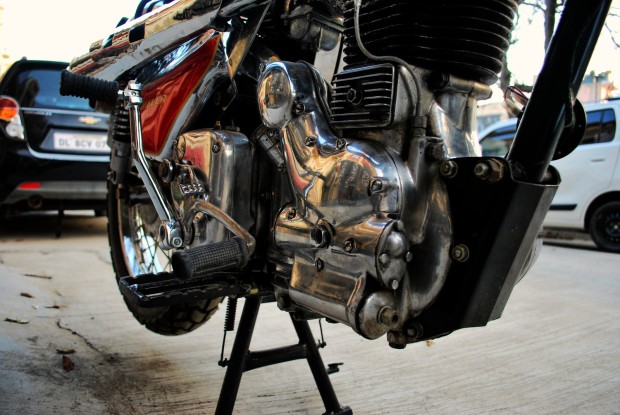 Now I don’t want to ruffle any feathers here when I say this (especially since I have a long history of taking somewhat rare bikes and making them “my own” so to speak) but I’ve noticed lately that it’s getting pretty hard to find a nice original XS650 these days. I commented on a thread somewhere recently that it seems like every kid with a Harbor Freight welder and a tractor seat is taking the really nice stock XS’ and chopping the hell out of them… often with less than impressive results. But hey who am I to judge. Anyway I tripped across this stunner of a late model stocker today and it hit me again how unusual it is to see one that hasn’t been hardtailed , streettracked or cafe’d! And lucky for me that SpeedFourJoe over on ADV rider was kind enough to hook me up with his flick page!

He wrote in that:

“It had the “tiller” bars and king and queen seat when I got it. I changed the seat and bars, and then just went through it mechanically, and painted some rusty parts, but mostly just a good cleaning. There are so many modded XS650s out there, it is nice to keep one stock.

Hell of a nice save there Joe! You know if it wasn’t for my 2 stroke addiction I’d probably be all over these bikes! I may have to hunt one down yet.

Here she is in all her glory!

And here’s a few select shots from the flickr page. Hit the link above to see all the work that went into her. Great Job!

Some before and build pics: 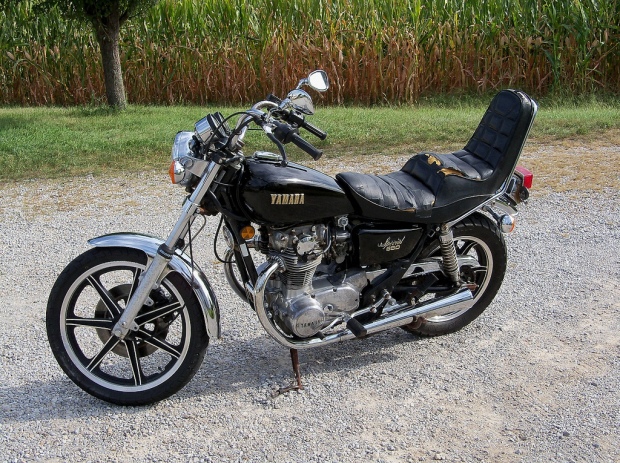 Here’s one I’ve been trying to get posted for a week now.

I got a lot of good photos of this bike through a series of connections that started with Bur Zeratsky out of Wisconsin. He took a few nice shots of it on a ride and and sent them to me. After we spoke he contacted the owner and builder of the bike, Mike Clawson who then provided some more shots and some great background info.

So Mike wrote to Bur about the bike after his inquiries who then copied this info on to me. whew… Aaaannnyway…

He wrote:
Thanks for those nice compliments.

The Middle of Nowhere run was its maiden voyage since its restoration; previously it had only been putt-putted around a bit to break it in and get its jetting somewhere in the ballpark. It ran the 60 mile MON run in fine style, with a couple of stops to fiddle with the needle position. I think the main jet can be dropped another size or two but I want to put a couple more tanks of gas through it before I do that.

I bought the bike at the Mid-Ohio Vintage Motorcycle Days swap meet in 2003. It was a lump of rust, and I originally intended to use it for parts.Then I got the idea of re-creating the AJS enduro I had built ‘way back in 1975.

My earlier effort, which I built when I was 20 yrs old, was basically the Stormer MX with a WR transmission and a hand made lighting kit, with a speedo from a Suzuki enduro. Converting MX bikes for enduros was very common back then. I ran a bunch of events with it but it seemed to do its best at hare scrambles and hare& hound. Long travel suspension bikes started hitting the tracks and it was no longer competitive. I thought about forward-mounting the shocks and longer-travel forks but the British motorcycle industry was collapsing and I didn’t want to put big money into something I couldn’t get parts for. So I bought a TT500 Yamaha and modified and raced that.

So this is the bike that I wanted to build in 1975. I didn’t have the time, tools, or patience then. I came across pictures of the later bikes that AJS produced after withdrawing from the US market (they are still in business), and it looked like something I could do.

The shocks are forward mounted with a set of custom-built Falcon shocks. The forks are 35mm Marzocchis, common on KTMs and Can-Ams of the period. Buchanan’s rebuilt the wheels with new Excel rims. Most of the rest is stock AJS, with some hand made bits. I fabricated modern style folding brake and shift levers, a skid plate, and adapted modern style wide footpegs. The AJS people in England helped out with a number of parts, including an ignition stator with a lighting coil. They also fished that expansion chamber out of a storage barn for me, but I had to make all the mountings and a new airbox to accomodate it. I used some out-of-the-catalog parts too, such as fenders, because I intend to ride it and I want as many parts to be commonly available as possible, especially crash items.

This winter I plan to refinish its original gas tank, which is a rare AJS desert tank which holds 3-1/2 gallons, a gallon more than a standard tank. It appears to need it as it doesn’t have much range. Then I want to get a DMV inspection on it and get a title and license plates.

Hope to see you again on the trail.

Thanks gentlemen for the legwork and fantastic pics of this great bike!

the original picture from Bur out on the trail.. 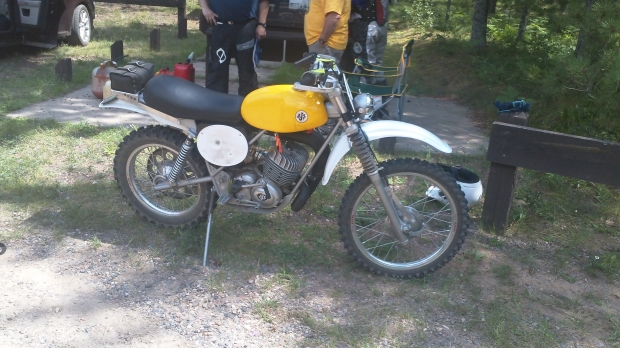 And some follow up build pics and such from Mike the owner.. 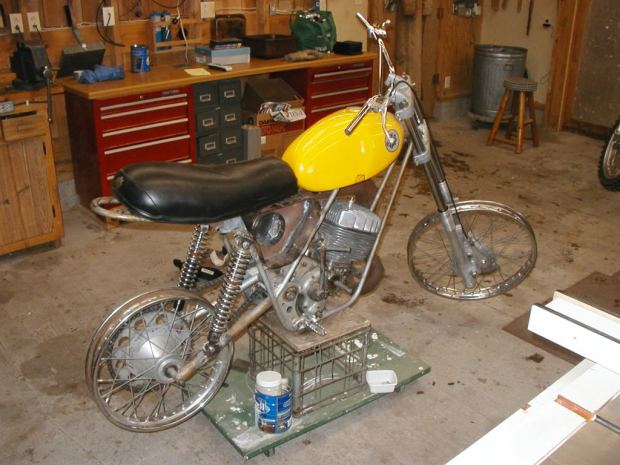 Mike wrote on his photo page :“The Fruits of My Labors. In June 2011 I broke the rebuilt engine in carefully, which wasn’t easy because it likes to GO, in spite of the restrictive silencer. August 2011: It ran well for a 60-mile off road event, during which I got the jetting dialed in. Not sure if the initial rich jetting was part of the problem, but it really drinks the fuel, limiting its range. Not uncommon for a big 2-stroke. The 3-1/2 gallon “desert tank” it came with will be a welcome addition, but it is in poor shape and needs to have its interior sealed with epoxy to prevent destruction from our modern gasoline. Then I need to sand and paint its exterior. I can’t decide whether to paint it the correct orange or yellow color, or British Racing Green like my original AJS enduro. There’s a lot of orange and yellow bikes around these days so I am leaning towards green. It will have to wait for winter in any case. There’s riding to be done now.”

Thanks to Danny Brimhall of Mesa, AZ
I restored it last year. Took me around 9 months. 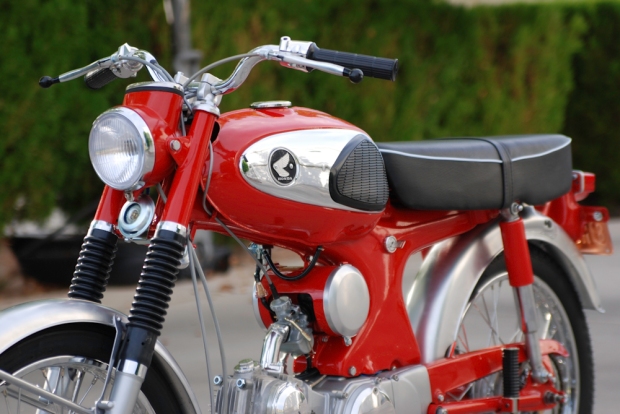