It’s promising to be an interesting season with spec tires and lots of movement. 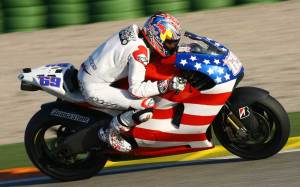 American MotoGP star NickyHayden is now at the end of his run with Honda. It’s been a good run with a MotoGP championship and an AMA championship but it’s clear that Honda is enamoured with the smaller riders from the 250 ranks and are not going to build him a bike that fits his slip sliding style. So now he’s off to Ducati for some italian/american action and a partnership with another former champ Casey Stoner. I hope he has great success and sticks it to Honda (and former teamate Pedrosa) next year. Go NICKY!