Sam Simmons sends in this pair of beauties. A pair of hopped up Yamaha BW (Big Wheel) 80’s.

Sam writes in:
Hi Steve,
Hope you’re doing well. Excellent ( new) site (as usual!!). I recently
redid a couple of Yamaha BW-80’s,so here are a few pictures for you…
Surprisingly,both BW’s were still in the hands of their original
owners,one in MO,the other in IL.
Both were in good overall condition,but pretty tired in the ‘Engine Dept’
. I ‘stretched’ the suspension on mine,while my wife’s is stock. Once the
exhaust  and intake systems are de-restricted,carb’s rejetted,these
little shits  fly…almost 50 mph.

Holy Smokes! 50mph on these must be a hoot! 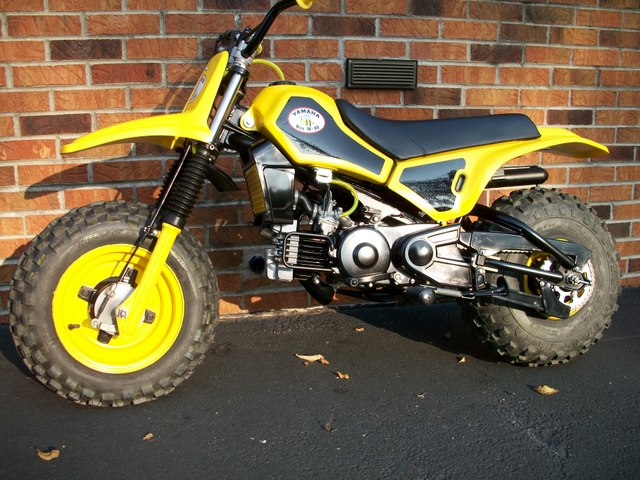 Sitting Pretty!  Some nice clearance there! 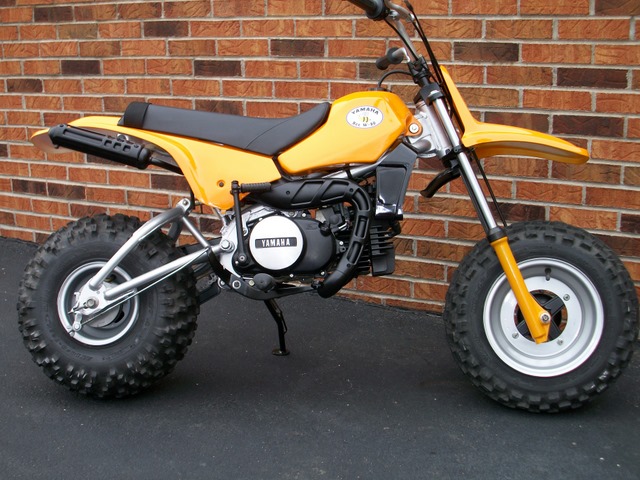 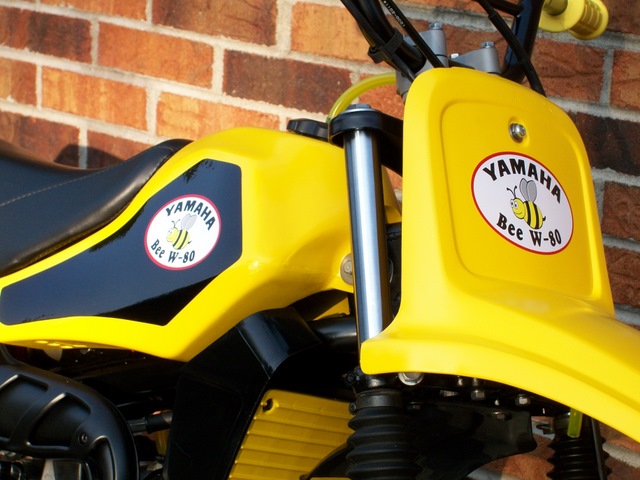 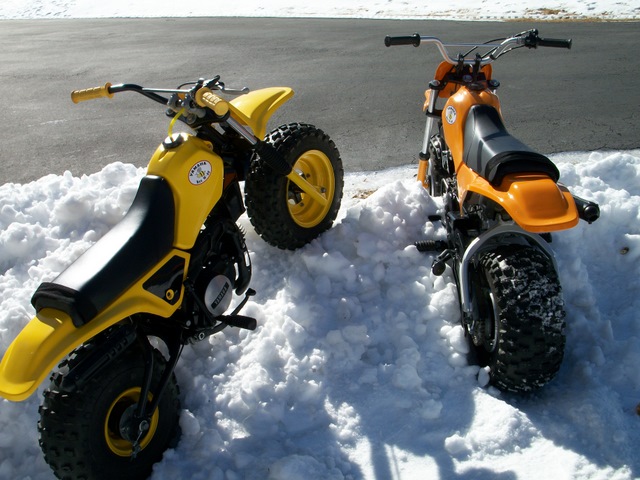 How to raise em up! 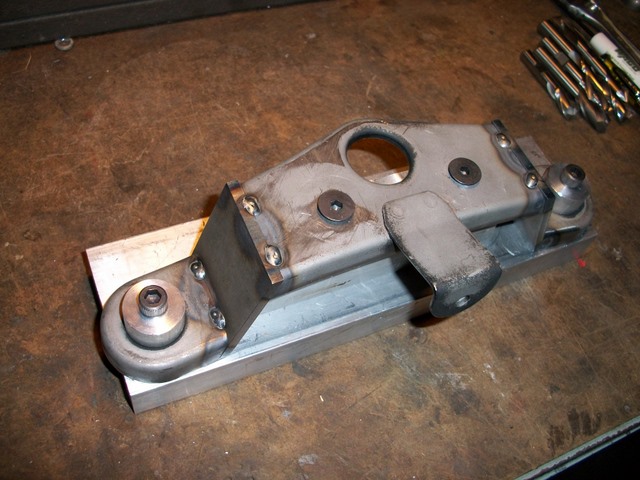 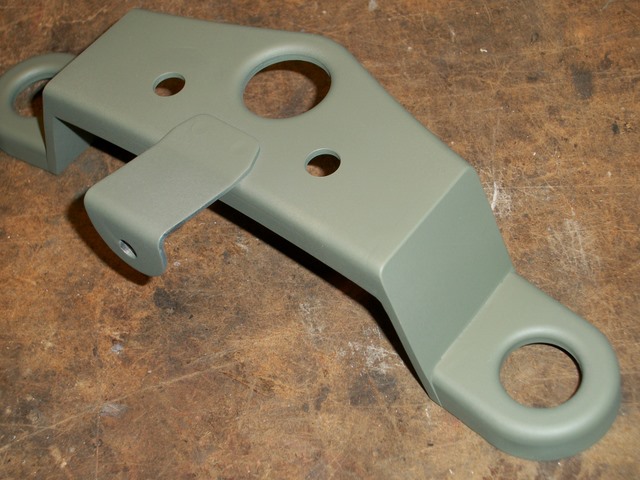 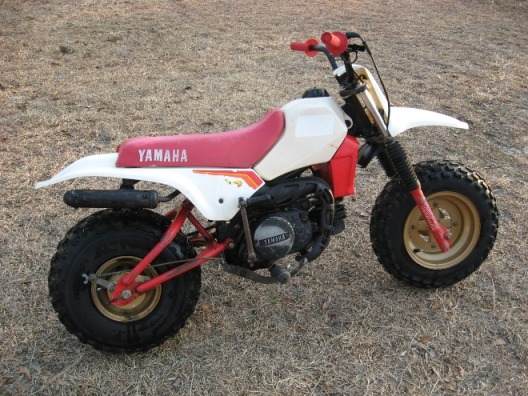 Sam has built so shared so many interesting bikes with me that he has his own search term over in the cloud.  do yourself a favor and check out some of his other excellent builds.  His 2-stroke bikes are legendary.  you can see more of his stuff over on my 2 Stoke Biker Blog.  I havn’t heard from him in a while and I fugured he’d been up to something special and as usual he doesn’t disappoint.

Hello Steve,
Been a while,huh. Well,although I’ve been involved with several non-motorcycle related activities,I did manage to finish the RE500(just yesterday!!).The basis for this 60’s theme street scrambler was a new,dealer leftover ’07 Bullet my wife located in Ohio late in ’08. I bought it for the sole purpose of doing just such a bike,which made for a really odd feeling when I purchased a new machine that: 1) I

So,I hope you enjoy the pics,Steve.

Almost forgot… The before picture!!

Maybe this is what Gave Boss Hoss their idea! LOL. Interesting how one is transverse and one is inline.

Hello Steve,
I’m also a fan of the early SAAB model 93 & 96 cars,having owned several some 30 years back. I’m
presently looking to buy another one.
So,in my Internet travels,I happened across these SAAB powered two wheeled hybrids. One is powering
either a Ural or Dneper ;the other a BSA chassis.
These little cars are loads of fun to drive.There are several great videos on YouTube about them…..

Thanks as always! Sam. Much appreciated!

Hi Steve,
This is the 1975 E-start Commando I owned a few years back. It was quite a looker and performer;absolutely stock,and originally purchased new by a airline pilot in Ohio. I didn’t suffer any electricalprobs as others did. I preferred the 1975 model for the shift location, and that black/gold/alloy visual combination was stunning……

It Sure is! thanks again Sam!

Hi Steve,Since you have a very good appreciation for atypical bikes(some of them 4 strokers),I’ve sent youa picture of my 1990 CB1.

This bike was found in great mechanical, but _terrible_ _cosmetic_ condition (unusual combination,IMO).There was a very lengthy laundry list of parts and work performed to finish this bike. You may recallthat the little CB1 was available here only 2 years, and not well received. One major negative(IMO) was it’s very drab color scheme-blue and pewter silver. Comparing a pic of a stocker againstthe bike will tell you how/where the time was spent…..this bike is a piece of jewelry,heavy on the ‘glitz’.I’ll confess that _I didn’t do any of the work_,a very talented friend built/rebuilt it,and I was so impressedby it,that I bought it. (I did fab the handlebar risers later to accept a set of K&N bars).What a great little machine,but that constant sustained high road rpm wail did take me a while toget used to…… I later passed it on to another chum similarly impressed by it’s appearance.

I’m in a military Sidecar mood all of a sudden!! A great errr.. modern interpretation. If a new Ural is “modern”. I love this build. All you’d need is an old Russian or German military uniform and yo could star in your own movie!

Here’s something to give you an idea of the kind of attention to detail he has. Fantastic work!

From his recent E-mail:

I’ve done some ‘different’ projects since the RD-K500,only one of them being as ‘intense’ and as involved as the RD-K. That would be the little Gilera 124 army dispatch bike.

You may get a kick out of this bike….
I was wanting to do something military for a change,and a chum/collector had to Gileras to offer.
Both were 1967 /_*SEARS*_/ 124’s(Gilera),and one had only 38 miles use!(with traditional rust and faded color).

To make a long story(and project) short,Steve,it was a more challenging task than I expected;trying to come away with a finished product that was convincingly real/original. I think that I did that,but it was very similar to the RD-K in time spent……really. Literally,any pieces/features not found on the stock SEARS 124 that are present on the ‘Gilera 124 Militare’ were either new fabrication(i.e,seat, rack,air cleaner) or heavily ‘massaged’ oem parts(i.e,forks,shock location,both fenders).The handlebars began life as RZ350 units.
It does fool the ‘experts’. Another chum took the silver 124,and did a beautiful little vintage Italian ISDT machine.

I done a couple of other ‘odd’ vehicles too,but I’ll save that for another email to you…..

One of my favorite bike builders of the last decade or so is a gentlemen by the name of Sam Simons. It’s not surprising really since Sam is such a big 2 stroke fan and has built many a wicked special. We’ve never met in person but we’ve exchanged the odd e-mail from time to time and lately he’s been a busy builder indeed. He’s sent me a lot of interesting stuff over the last week or so and gave me his blessing to post it here. So for the next few posts or so and whnever the occasion arises I’m going to pass on some of his creations here. I hope you enjoy it.

I’ll start it out with the creation that first caught my eye. It’s a Kawasaki H1 powered RD400. The RD-K. The best of RD handling and Kawasaki triple power seamlessly grafted together.