Thanks to JM for this fine shot.

If these were sold in the US I’d find a way… If it’s modern and has a fairing then this is my kind of bike.

Is it any good for your excellent web site……you already have my other two bikes on there….
The Spencer EVO…..and my Moriwaki Kawasaki Z1R. 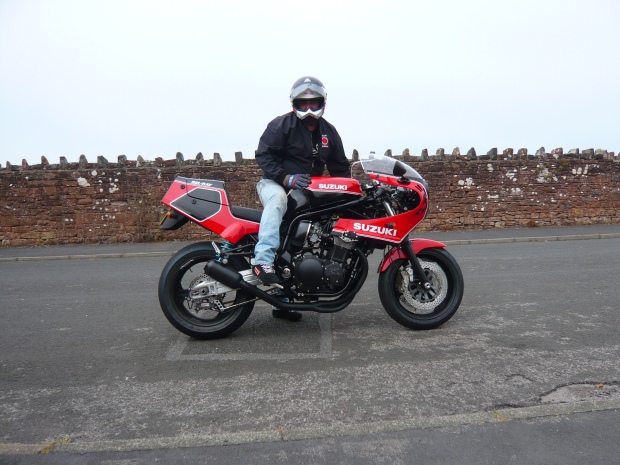 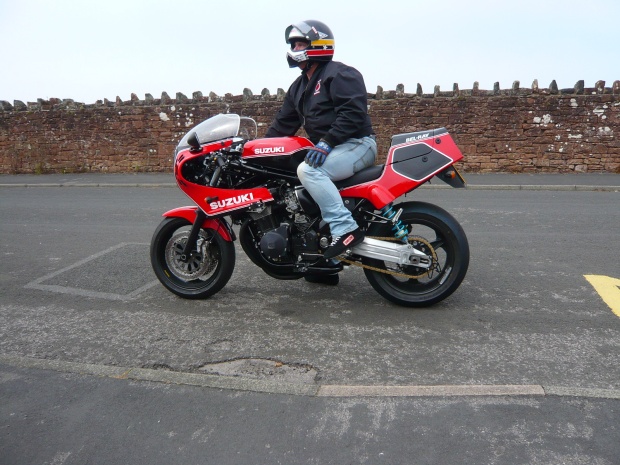 Waiting for me in my e-mail after my break. WOW!

Thanks to Alice Stevenson who wrote in:

Here are some pics of my latest build. It is a TT500 Yamaha with some modifications; mainly FZR 600 forks, wheels, and swing arm. It has a FJ600 tank. Still having teething problems, but that is the nature of the beast. This thing is a BEAST. 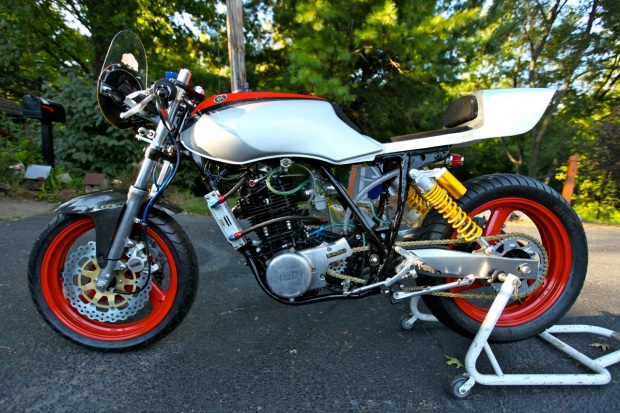 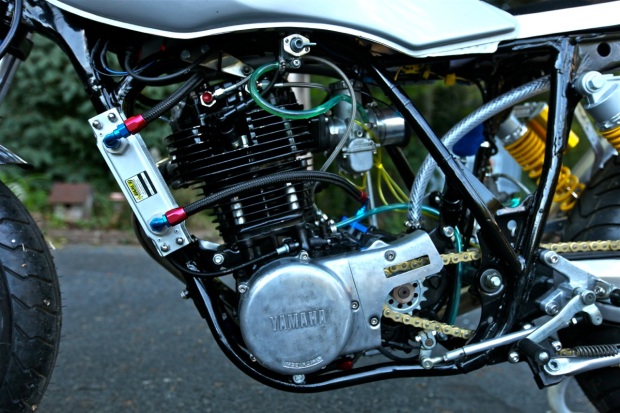 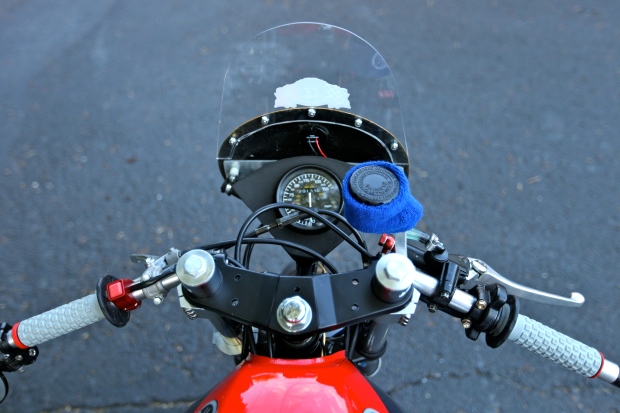 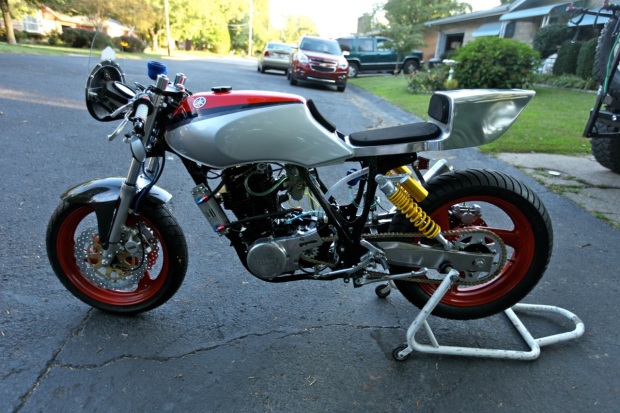 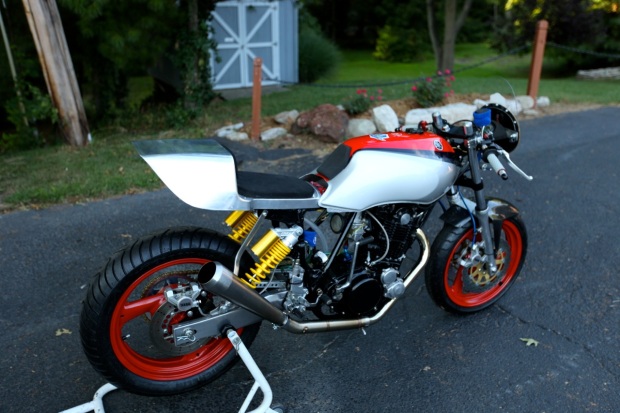 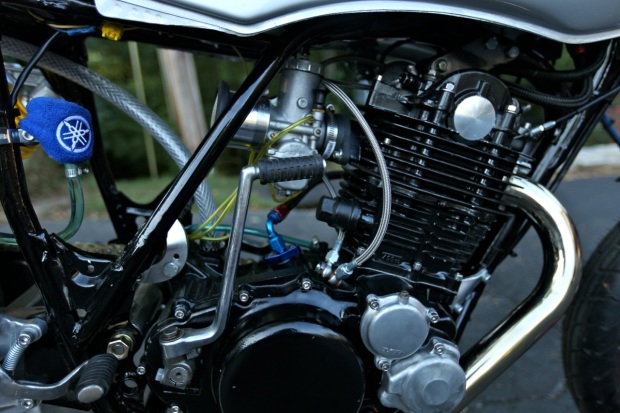 Oh yeah. Here’s the Before Pic! 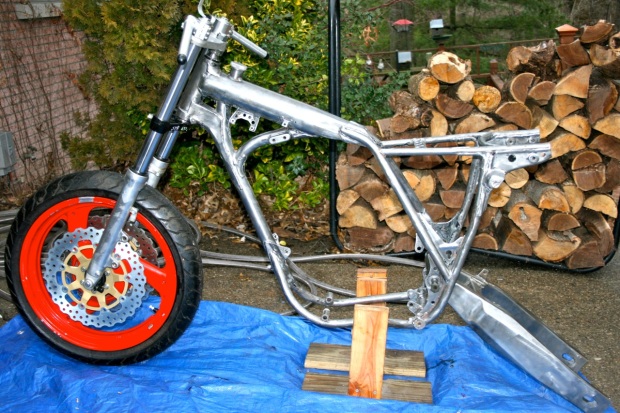 Special thanks to from Steve Ginn!

In the comments section of yesterdays post was this comment from one of our regular contributors Mr. Steve Ginn who wrote in a response:

If you didn’t get the hint,  go to his Picassa page HERE and be amazed!

Oh and Steve I lifted this single photo from the page as direct linking to a single pic seemed difficult. Hope you don’t mind.

I don’t do this often (if ever) but this is a special case. Travis Lawson of Iron Spade Cycles (whose bike builds have been all over this site) got his hands on a very special Yamaha RZ350 s stroke engine and needs a titled frame for a project he has in mind. It does not have to be flawless. If you can help him out I’d consider it a big favor since I REALLY want to see what he’s going to do with this beast. Here’s a LINK to his FB page for more.

Would you be kind enough to put the word out to your fellow Yamaha RZ friends and family that I’m in need of a titled Yamaha RZ frame. I have a new project that is starting out with just an RZ350 engine with a 420cc kit. It was a spare race engine that came with a friends KR Special he bought last year. I guess it was the original engine to the bike he bought, the owner had installed a stock RZ engine to make it more street friendly and sellable as a bone stock KR model. Beaux basically gave me the race 420cc motor and said build something cool with it, so we’re going all out, I really just need a title and a head tube, but having the rest of the frame would make things easier.

Its a long term project, I have access to a CNC waterjet, via my friends metal cutting business. He’s going to help me make an alloy and steel hybrid chassis with digital waterjet cut side plates in aluminum. Hard to describe but once I get my ideas on paper and into a 3D modeling program, I’ll be able to show you what I mean. I bet that engine makes a solid 75-80HP. I want to get a set of the latest Duc or GSXR wheels, like the 5 spokes, I just really like the look over the standard 3 spoke wheels.
Its going to be a retro mod, modern wheels, brakes, and suspension but alloy tank, seat bubble and Paul Smart style half fairing, at least that’s what I’m thinking now anyway.
Thanks for your help.

Like I said I REALLY want to see this build. If you know a guy who might know a guy let us know.

We now return to our regularly scheduled broadcasting…

Looks like it was a heck of a nice show! Thanks Much for the pics sir!

Yo Steve ,
Good to see ya back at it.
2nd year of the Lemay Museum Vintage bike show was twice as good ! It’s theme was billed as 100 yrs of BMWs but really Italians won this battle. Way more Ducs and Guzzis. British iron held there own but my god the parking lot show was just as good, especially when the RZ350 and RZ500 pulled in together. A few pics.
Robie Pruden 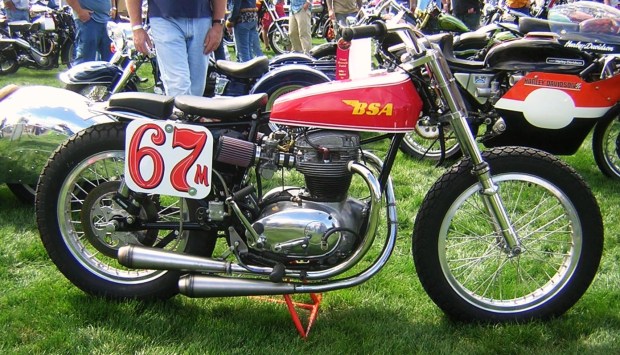 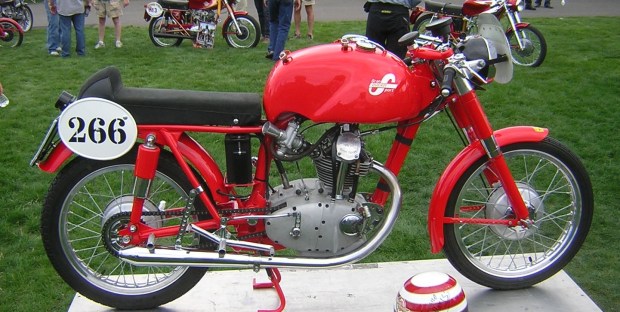 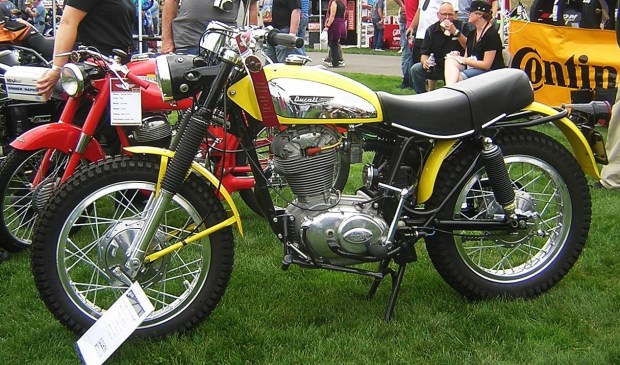 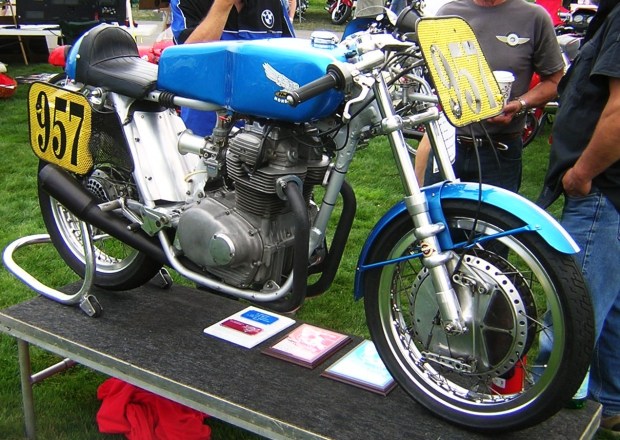 Thanks to Steve Baugrud for the pics. This is almost a hybrid(ish) tracker cafe. I like it.

It’s a 1981 yamaha xs650 that I picked up for $100
I completely rebuild engine, including vapor blasting the jugs and case down to bare metal. Side covers, frame, forks, triples, mag wheels, swingarm, and just about everything else on bike is powder coated iron glimmer. Tires are Avon speed master mk2 front and rear. Clip ons are tarozzi, throttle is magura, and pipe is a ceramic coated one- off from gordon scott engineering. Tank is from a 1977 xs750 and seat is steel made by house on fire industries. Upholstery is genuine cow from new church moto. I threw away wiring harness and wired from scratch. I used some wrench monkey style blinkers for safety. This is my forth build. I work in medical field during day and build a bike here and there on my limited free time in my garage. Taught myself how to weld, grind, cut, etc.
thanks
Steve Baugrud
Waukesha, wi 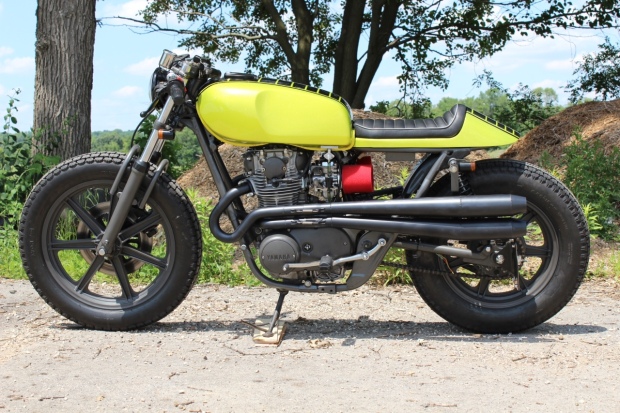 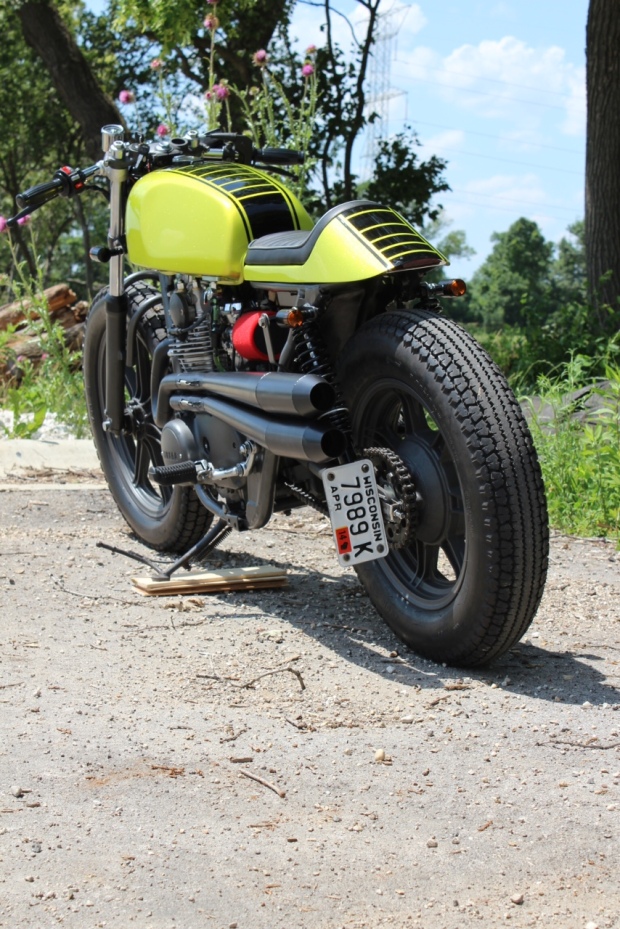 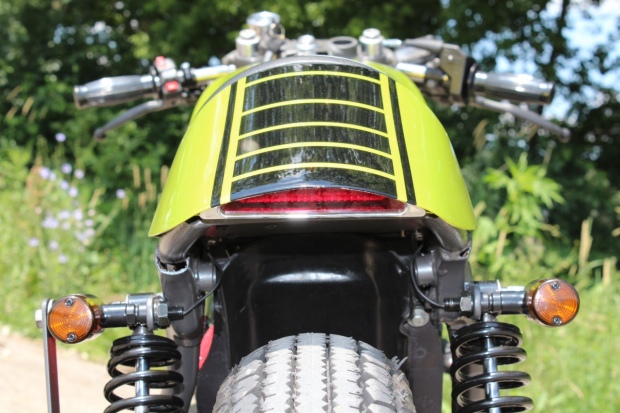 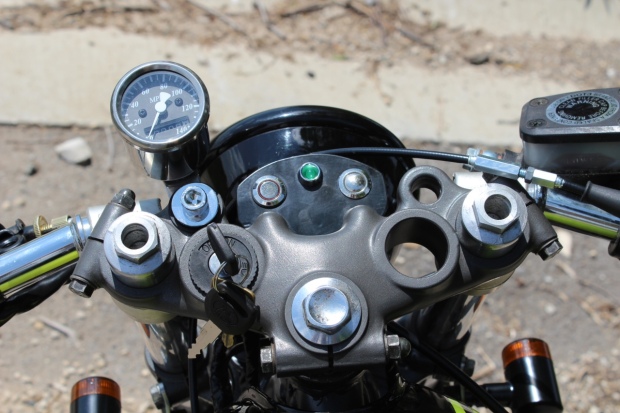 An old 2 stroke loving acquaintance buddy passed away recently while doing a motard track day. Hell of a nice guy and and a balls out rider. this getting older shit is starting to suck. He will be missed.

Fall is sloooowly creeping up on us here in North Florida and I’ve started riding again on occasion so I guess I should start posting a bit.

Thanks to Ben (and the rest of you, you know who you are) for the kick in the arse… He wrote in:

“Fall off the wagon and post some more stuff, my morning ritual is getting staler without any good cycles to admire and get some inspiration from.
You could add some shots of the bike I wrapped up this past spring! 4 photos attached.
Cheers
Ben”

It really is a nice build so here we go. Oh and I’ll start digging to the e-mails here shortly. Stay tuned. 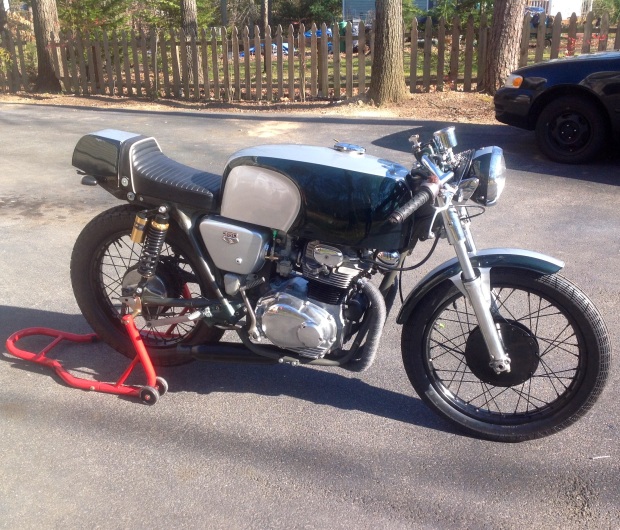