Thanks to Ted Brecheisen for these really interesting shots.

I went to Sheridan, IN last weekend to a very cool place that is like a museum but is also a shop. The XS 650 Yamaha was a stock bike he found in the weeds a couple of blocks from his house. It’s on the way to a great looking flat tracker.

Don Christy makes “cycle art” from junk parts and bicycle frames. Everything is miss-matched. On one piece the v-twin’s cylinders are made from plastic drain pipe. The crankcases on many are made from cake pans. Very creative. More pics are at www.flickr.com/photos/boanerges-indy

Thanks for a great blog,

Wow! That’s my kind of art! Talk about shopcraft as soulcraft! And a great way to make a living too! I really like that style and that XS is sweet! Thanks Much Ted! 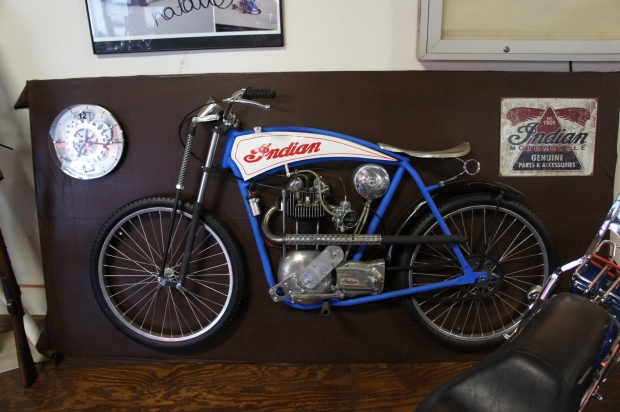 Can you guess or did you know?  See link below for the answer.

When it belonged to you know who.  Talk about a legacy!

I realized yesterday when I posted the collage that it won’t go to full resolution by simply clicking on it. If you want the pics at their uploaded resolution, click on the photo and then look for a link just above the photo that will read something like:

Hit that link and you’ll get the original in all it’s glory! Be warned though. NOT recommended for slow connections! Hope that helps.

Well time to start on the next million!

Thanks much to the second owner, Dennis Callnon for this beauty. Man I’d love to find an XT (same bike but street legal) in this shape. Would look great next to RZ350.

From the bottom of my heart, A sincere and heartfelt THANKS TO EACH AND EVERY ONE OF YOU FOR STOPPING BY!! The world is a fast moving and busy place. There are only so many minutes in the day and I am enormously humbled and infinitely grateful that you take some of those minutes and spend them here to see whatever the heck it is I have to pass along at the moment. I know from looking at the stats that you’re on every continent, in every time zone, and stop by during all hours of the day and night. Some of you visit during a morning coffee and some at lunch. Some are at a desk at work and some are on smart phones while on the go. And wherever and whenever you are, I hope that you’re getting as much joy from visiting here as I get from hosting. It is truly my pleasure.

One Million! 1,000,000. A hundred thousand times ten. Even in a world where billionaires are getting almost common it’s still a hell of a good, satisfying number!! And to be honest, I almost sorta missed it.

You see honestly, I don’t really look at the counter all that often anymore. Yeah it’s down there and I confess that in the early days I was a page view junkie as much as any new blogger. I’d look at the average hits and do the math in my head quickly. I remember in the early days thinking that 100,000 hits before Christmas was possible. Seems sort of weird mow. I am STILL just amazed that an average guy in North Florida with a quirky love of motorcycles could get this kind of action with a blog that was actually only started because he kept finding so much cool four stoke material while he was trying to sniff out images for his first blog which is two stroke only. Many long time readers know that THAT is my first real motorcycle obsession. And If I have any regrets (no not really) it’s that I’ve seriously neglected my 2 stroke page. Riding, work, family, etc etc. all take a toll on the clock. That and the fact that I didn’t attach the words “of the day” to the title of “Two Stroke Biker Blog”.

But it’s cool. Two strokes are like an understanding mistress. They’ll be there to show you a good time and get your heart racing when you need some excitement away from the sometimes mundane, reliable, routine (but loveable) world of the four stroke machines. And then they’ll go back to waiting in the garage, getting dusty, pilot jets clogging up waiting for the next quick tune up and thrill ride. Ahh.. but spring is almost here and the mistress’ will be getting some much needed attention soon enough. Daytona, Deals Gap, riding Into History, maybe even Barbers or Mid Ohio or even Indy this year!! Economy willing, who knows! Most of these aren’t four stroke vacations for me. They’re either close enough to ride the RZ or H1 or far enough away to trailer them. And anyway it seems like there’s some good material coming in for the other board. I’ll give it it proper attention soon enough. It seems like, where this place is like a metronome the other board is more like a cuckoo clock. Posts come at intervals and in bunches.

Now Where was I? Oh yeah sorry.. Staring at the counter and pondering the hits.

Not that I’m completely nuts… yet… but truthfully this place has almost become therapeutic for me. It’s never a chore anymore. At times it has been. I’ve even written about it here and there and asked for advice. But I churned through the occasional bout of melancholy and found some balance. And at some point it’s morphed into something more… more… I don’t know.. “organic” I guess. That’s close. It’s not something I do because I feel compelled to but because it’s become as much a part of my day as a cup of coffee up or kissing my daughter goodnight. Even on those weekends when I’m traveling or during the holidays, NOT doing it puts me out of whack. Like the feeling as I’m leaving the grocery store that I just KNOW I forgot to buy the thing I came for but can’t seem to remember now what it was.

I’ve also become a habitual and subconscious content hound. I do it without even realizing it. I get lot’s of great e-mails but i still do a lot of leg work (not work at all really). It’s like a reflex. Hit some shows. Stop by bike nights, events, group rides. See an interesting post somewhere and fire off a PM for permission, or even better I’ll be out and about and see something parked and just instinctively grab the camera (which is now always in my cay or stashed on my bike somewhere). Those are my favorites. Like catching an unexpected Marlin when you’re just trolling. It’s now essentially second nature. And yes sometimes there dry spells and I have to scramble a bit but it’s my fault really. I say “of the day” but truth is I have way more than 365 posts a year. I never save anything during the feast for when the famine hits.

SO! Anyway… Like I was saying, I noticed a few days ago that we were getting very close to this very significant number. I had lots of silly ideas about things to do to mark the occasion but it all seemed a big distraction to the actual reason for this place which is to show you what two wheeled oddity the universe has put on my plate today. So in honor of this occasion I figured I’d just put together a collage of what is really a tiny fraction of the images that have been posted on here. And in truth I wanted to re-post my first ever topic but the piece of crap image hosting service I used to use went offline and took a good portion of very early links with it so many of these are essentially empty now. Hey VillagePhotos “seemed” like a decent host at the time. Sorry about that. I do have the originals but not the patience to reconnect it all. So if you want anything specific let me know and I’ll get it to you. I do so wish that I had a screenshot of the very first attempts at building my own pages on the original blogger site. God were they awful! Thank you to those industrious souls who created the clean functioning templates. And also Thanks to blogger for screwing up my original page and lighting a fire under my arse to get me over to wordpress. Should have done it long before I did. Anyone who’s serious about blogging should really consider it.

Well enough rambling. It wasn’t really how I intended to go with this but it just sort of got the best of me. I know you guys aren’t here for my literary gifts. If I did I wouldn’t have started a photo blog!

SO! without further adieu. Here’s to the next Million!

By the way click the photo and look for the link on top of it for the full resolution image.

Another longer video from this “Top of the World” video rider. Watch it till the end where he looses it! The fisheye lens makes it look worse than it is is but it STILL a butt-pucker of a ride!

Spending as much time as I do poking around the web looking for material I can’t help but notice the giant leaps that have been taking place in regards to “amateur” video creation. Of course many of these are way beyond someone shooting from the hip and just posting it up. Yes, there ARE a lot of very well equipped and highly skilled “non-professional” cinematographers out there doing amazing things. But there is no doubt that the huge leap in functionality and drop in costs of equipment and post processing editing software has led to an explosion of really great content. I’ve seen everything from simple and fun short riding clips to some ongoing and very slick dramatic serials. I probably now spend as much time on youtube and Vimeo looking for entertainment as I do watching television. Probably more actually but I don’t think I’m typical… yet.

Anyway, here’s a great example of what I mean from Liad J.Shulam who wrote in:

G’day,
Me and my mates from Melbourne,Australia have made this movie about my 1980 Z500 , I hope you like it and will feature it in your Blog.
I just wanted to say your Blog Is Great! And that I check every day 🙂

Thank you for your time.