The latest results from the Bonhams Auctions. She’s a real Beauty though. 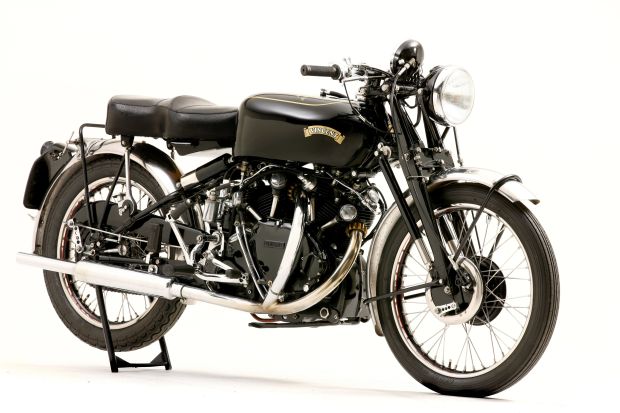 RECORD-BREAKING VINCENT BLACK SHADOW MOTORCYCLE TOPS THE BILL AT £1.4 MILLION BONHAMS SALE
The Bonhams auction at the International Classic MotorCycle Show at the Staffordshire County Showground topped £1.4 million on Sunday 28th April, with the top-selling lot a 1952 Vincent Black Shadow, which realised £113,500.
The fully-restored, ex-works machine formed part of the factory’s bid to set a new 24-hour speed record at Montlhéry in France in May 1952. Although mechanical failures prevented the bid from being successful, the British team returned home with eight new records, including six hours at over 100mph.
Among other auction highlights was a 1931 Brough Superior SS80 motorcycle won in a raffle more than 40 years ago and a 1914 Indian Model F once owned by legendary Hollywood actor Steve McQueen.
The latter sold to a European telephone bidder for £32,200, while the SS80 realised £57,500 – more than a million times the cost of the 1972 raffle ticket. Starting life as a sidecar outfit with Ipswich Police, the motorcycle was converted to solo trim and later offered as first prize in a fund-raising raffle at the Brough Superior Club. Tickets were sold for five pence each, or 50 pence for a book of 10, and second and third prizes respectively were 10 and five gallons of oil.
An eclectic selection of 30 machines owned by the late Clifford Jones proved popular with bidders, selling for a total of more than £175,000. The collection featured a number of 1950s ‘cafe racers’, as well as much modern-day racing and superbike machinery.
Meanwhile in the automobilia section, two Akai Yamaha race helmets worn by the legendary Barry Sheene in the 1980s fetched a combined total of £10,000, selling for £6,875 (Lot 105) and £3,125 (Lot 104) respectively.
Ben Walker, Head of the Bonhams Motorcycle Department, said: “Once again our auction at the ‘International’ Classic proved to be exactly that, with interest from bidders from across the globe.
“Record-breaking machines like the 1952 Vincent Black Shadow and the movie star charisma of Steve McQueen were among the draws for the crowd, and there was fierce competition for the Ducatis in the collection of the late Clifford Jones.”
For further press information please call 0207 468 8259, or email press@bonhams.com.

Please credit the Vincent image to ‘Double Red’. All other images are ‘Courtesy of Bonhams’