Regular contributor Ken Fontenot sends in this rather unusual build. 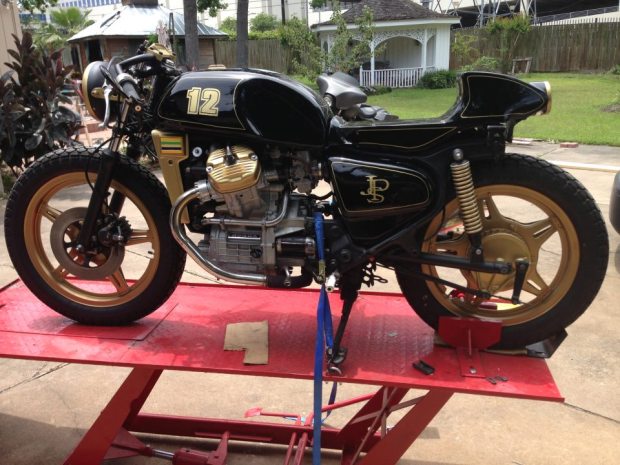 Steve, I have a friend/customer that just finished building a Honda CX-500 Cafe Racer with a bit of a different twist to it. Beaux Barfield is the race director for Indy Car Series and builder of the bike, it was built in his garage at home. This bike is was built as a tribute to Formula 1 driver Ayrton Senna, and was done in Ayrton’s Black & Gold John Player Special Paint scheme with his number 12. Beaux did a fantastic job on the bike, and will proudly ride it around Houston and display it at a few special events. Here are a few words from him:
Tribute to a racing legend. Ayrton Senna. I couldn’t be more proud of how this bike turned out. Big shout out to Ken Fontenot, Gordon Rundle III, and Erik Contreras for making this one happen.

Here is a short Bio of Ayrton:

Ayrton Senna da Silva was born in Sao Paulo, Brazil to a wealthy family. When he was four years old his father Milton bought him a go-kart, and by age eight Ayrton was regularly competing in karting events. His career progressed quickly, and in 1982 he moved to England to pursue his racing. In 1984 he came to the attention of the whole world by racing in Formula One. Over the next ten years he won the World Championship three times and engaged in some controversial racing with France’s Alain Prost and England’s Nigel Mansell. Ayrton Senna was killed on 1 May 1994 in a race at the San Marino Grand Prix when his car, which had been beset with problems the entire season, inexplicably left the track and crashed into the concrete barrier. His was the last death in Formula One due to the major safety reforms that the tragic weekend at Imola had brought about. He was voted by over two hundred of his fellow Formula One drivers as the best driver of all time in a 2010 poll. Senna was also a humanitarian who discreetly donated millions to help those less fortunate in his native country.